Carried by Something Else 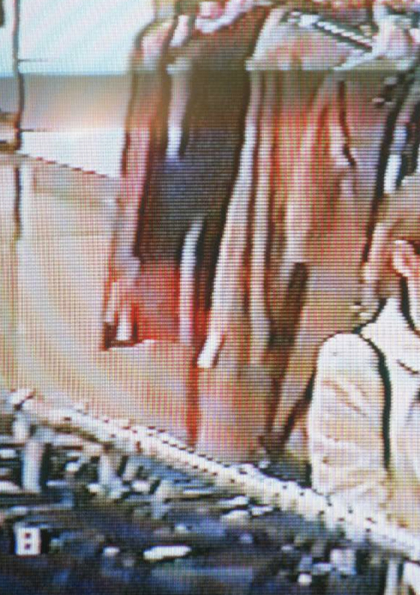 The word Körper (body) indicates a closed form. The very similar word Korb (basket), conversely, refers to an open container for carrying things. The relationship between opening and closure plays an important role in the exhibition of Alexandra Bircken and Anna Holtz, as does that between load-bearing elements and those that are carried - correlations that from the outset have been negotiated in relation to the human body in the sculptural medium. This body, however, is permeable: through its biological functions, and because as a social phenomenon it is bonded to its environment, which civilizes, disciplines, and optimizes it. The two artists also focus on the physical, social and economic forms and entanglements of the body.

The dismantling and consistent hard slicing through of a whole object on the one hand, and intertwining of disparate parts on the other, structures many of Alexandra Bircken’s sculptural appropriations. Motorcycles, motorcycle gear, latex bodysuits, weapons, wax, textiles, scaffolding, branches. Bircken entwines and envelops things, but also unveils them, exposing their innermost quality. She violates the integrity of the form, which is unbearable in its closed, self-identifying and contented state. Bircken’s hybrid figures, known for their vulnerable and energetic presence in the space, unfold precisely in the porous interstices and at the interfaces to the outside world.

Anna Holtz’s works no less intensively demand our undivided attention, which is initially drawn to the material. She works, for example, with bitumen, a natural asphalt used as a sealant, with biodegradable foil that can be dyed differently from plastic - it is permeable - and with wire. In the gallery in Schwaz, her wall objects use the constructive elements of underwire bras as a supporting framework which is simultaneously worn by the basket-like forms. A softened descendant of the corset, the bra serves to bring the female body into a standardized figure. Underwear also functions as an economic indicator that can reliably forecast fluctuations in purchasing power. Conspicuous here is the mutual entanglement of the sphere of supposed intimacy (Intimissimi) and privacy with the extremely calculated means of market research.

Anna Holtz invited Alexandra Bircken to exhibit together with her in order to open up her own work in relation to that of an artist colleague. In the main room of the gallery, Holtz places her recumbent floor-based work close to an upright figure of Bircken’s. This constellation of the vertical and horizontal engenders reciprocal transmissions. Holtz’s wire and eco-foil piece, for example, takes on the anthropomorphic features of Bircken’s figure. Seen in this light, it slithers across the floor en route to an unknown destination, to which Bircken’s wooden corpus on casters also seems to be heading, as though by remote control. The wire, in fact, represents the floor plan of the Schwaz shopping centre, which occupies a large section of the city. The references to consumer culture in Bircken’s sculpture are contextualized further against this background. How the logics of exhibiting as well as the presentation and distribution of goods, relate to one another is clarified by the terms in which the artists deal with pedestal and transport box, display and packaging, exposure and storage, interior and exterior.

Alexandra Bircken approaches the skin as the shell and organ of contact between the human being and the world, that we become physically and psychologically conscious of when exposed, for example, to the weather, a gaze, or to the headwind when riding a motorcycle. What is interesting in this context is that shopping centres are climate-controlled environments. They shield consumers in order to avoid any distraction from the desire to shop. The first shopping mall in the modern sense was built near Minneapolis in 1956 by Victor Gruen, who had to flee Austria from the National Socialists in 1938. In the days of the “car-friendly city” he designed the mall to enable car-free shopping. However, unlike the ancient Agora - the public city square open to market activities, public debate and jurisdiction - the mall tends to inhibit congregation. Entrances and thoroughfares in a shopping mall are massively regulated, particularly by one-directional escalators.

The invitation card depicts an image from a surveillance camera recording of Winona Ryder shoplifting. The actress, who was legally prosecuted for the act, explained her kleptomania by saying that she was probably seeking to regain some grounding through this tough confrontation with reality. Her behaviour was kind of masochistic as her desire for things was accompanied by a fear of predictable humiliation. The exhibition title “Carried by something else” is adapted from an essay by Ursula K. Le Guin, which reevaluates the evolution of humanity from a narratological perspective. Because mammoth hunting is far more spectacular and can generate much more attention than collecting seeds, berries and snails, phallic weapons such as spears and clubs are more dominant in our conception of the Palaeolithic than tools such as baskets for collecting and storing food. This enlightening, feminist text from 1986, however, still assumes a certain division of labour that assigns militant force to men and nurturing to women. Significantly, this division has been repeatedly projected onto sculpture throughout the centuries.

Leaning against the wall in the back room of the gallery is a sculpture by Alexandra Bircken of a row of motorcycle tanks encircled by a band of hair extensions. “Honda Honda Bionda Onda” radiates pure energy, as well as sexual energy, and wit. It requires self confidence and anticipation to ride a motorcycle. It is also challenging to build a sculpture, to succumb to the attraction of the object, to take up space. It takes courage to allow room for weakness and fragility in order to remain open and receptive. If underwear production is an index of purchasing power, the extent to which things and spaces - malls as well as social spaces - are sealed off, is a measure of the prevailing anxiety in a society.