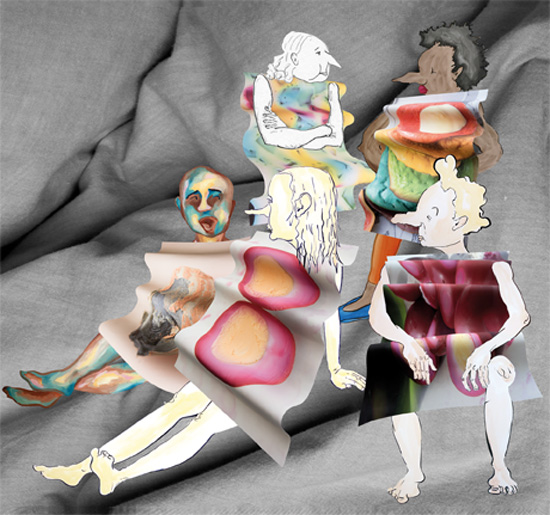 Anne Speier’s collages show colorful, amusing accumulations of kobold-like figures. A closer look brings irritation, though, as the artist (b. 1977) employs a wide range of different media, styles, and techniques in her pictures at the same time. The fragmentation of her figures, which are composed of drawn, painted, photographic and sculptural elements, evokes the Surrealist method of cadavre exquis drawing, an absurd collective technique based on drawing a part of the body on a sheet of paper and concealing the drawing by folding the paper before passing it on for the next contribution. Yet, the gestures’ high drama and the “clothes’” baroque sweep also trigger associations with historically charged panel paintings and picturesque groups of figures. In Anne Speier’s case, however, the sweeping clothes are cutouts of wavily draped photographs of dishes prepared by the artist. Speier has chosen an unusual fare comprising such specials as jelly, “egg in the basket,” and “broken glass jello” – feats that oscillate between solid and liquid and, partly dyed with food coloring, convey an artificial aesthetics. These culinarily composed figures are positioned in large-format black-and-white photographs of interiors like bedrooms and kitchens. The rhetoric of excess continues in the texture lines and hatchings. Most of the figures are executed in various styles of drawing and painting and characterized by exaggerated noses. Speyer also relies on different historical modes of representation for rendering her dramatis personae. Their plentitude, multiplicity, and indeterminateness clearly reject any notion of an authentic approach and gesture. The figures, which may often strike us as stand-ins for artists, art styles, or works of art, present themselves in hysterical, bohemian or competitively social constellations and partly resemble caricatures or allegories of the art system.

The images we come upon in Anne Speier’s exhibition “Seeing the Contemporary” in Schwaz do begin to move. On dinosaur legs, they people the gallery as animal picture collages or 3-D collage monsters. Using a crystal ball, the oafish headless hybrids strive to ascertain what the zeitgeist is about at the moment. Yet their attempt at grasping the contemporary fails again and again, since trends can only be understood in retrospect. Inspired by the saying “I felt like a dinosaur,” Anne Speier as a participating observer describes the uneasiness one feels when trying to localize and assess one’s own images within a wider context, within the discourse of their time. It is a feeling of unease hovering between the fear of being stylistically categorized and not belonging anywhere and the equally deep fear of constantly turning into the person others expect you to be like Zelig in Woody Allen’s film of the same name.