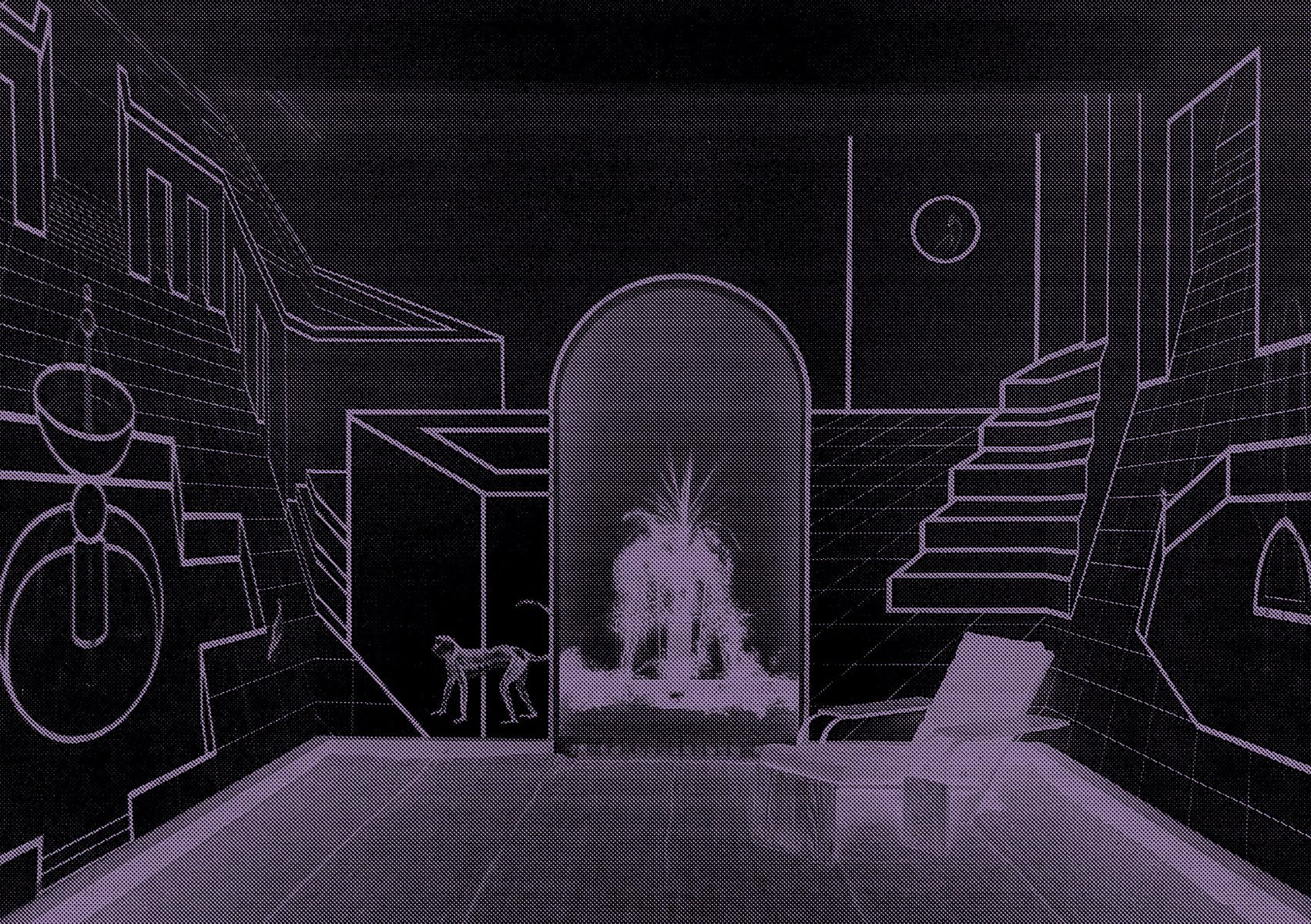 A line expresses movement. It connects two points and divides fields or terrains. It demarcates a stage, a projection surface, and separates a scene from its audience, real from illusionary space. Julian Göthe, however, maintains permeability in this border between reality and fiction. His works, drawings, sculptures and installations flip back and forth between various media as well as two- and three-dimensionality. The Berlin artist and sculpture professor in Vienna is known for his wall-based rope pieces. In his current exhibition in Schwaz, Julian Göthe again creates an alternative space using polyester ropes. His rope drawings compartmentalize the surface of the white walls, but not in an indifferent modernist grid. Rather, they draw attention to areas of particular attraction, specific surfaces, apertures and conspicuously opulent frames, producing a context for a series of posters, for other spaces that integrate the viewer into the overall scenery. Alienating moments are evoked by the digitized “drippings” that isolate distinct areas on the posters. Depicted are not visions of private spaces but interiors styled by designers such as Jean-Michel Frank, who offer up their design proposals and their relationship to society for discourse. The rope drawings and interior scenes let the walls speak, so to speak, by expanding their horizons more broadly than those maintained by heteronormative society. This promise of freedom, however, leaves Göthe largely in a world of projections, in a context of desire that is not to be enforced by new regulations.
“Walls Talk” is the title of the film shown in the small room, which can be read as a complement to the installation in the main room. It is a one-and-a-half-hour sequence of cinematic footage from Göthe's universe: set design, baroque architecture, art and design history, and music. Line formations swing and dance to the rhythm of the sounds. With a somewhat spooky inquisitiveness they form arcs and curls, glide over curvatures, nestle against elements as if trying to decipher a social code, only to be inspired into new forms by the next object. Like staffage figures or comperes they introduce the action of each scene. Sometimes they form a curtain of sorts that is pulled aside at the left edge of the screen to reveal the scene. They playfully caress images taken from books and design magazines depicting representational and stage architecture, extravagant decor, photography and films. These include staircases, draperies, Rocaille decoration, upright monuments and the muscular bodies of bodybuilders, or mannerist copper engravings by Hendrik Goltzius, for example, which are captured so gently by the camera that they seem almost palpable. This zooming into the picture gives us a nuanced look at details that have received little attention in the art canon.  The smooth lines, in tandem with the camera – and thus the observer’s eye – follow, overlap or block individual elements of the picture without ever touching them. They always remain in their own masked sphere. The world that Julian Göthe generously shares with us is negotiated on an aesthetic level that leaves room for ambivalence and therefore has the potential to affect change without becoming dogmatic.