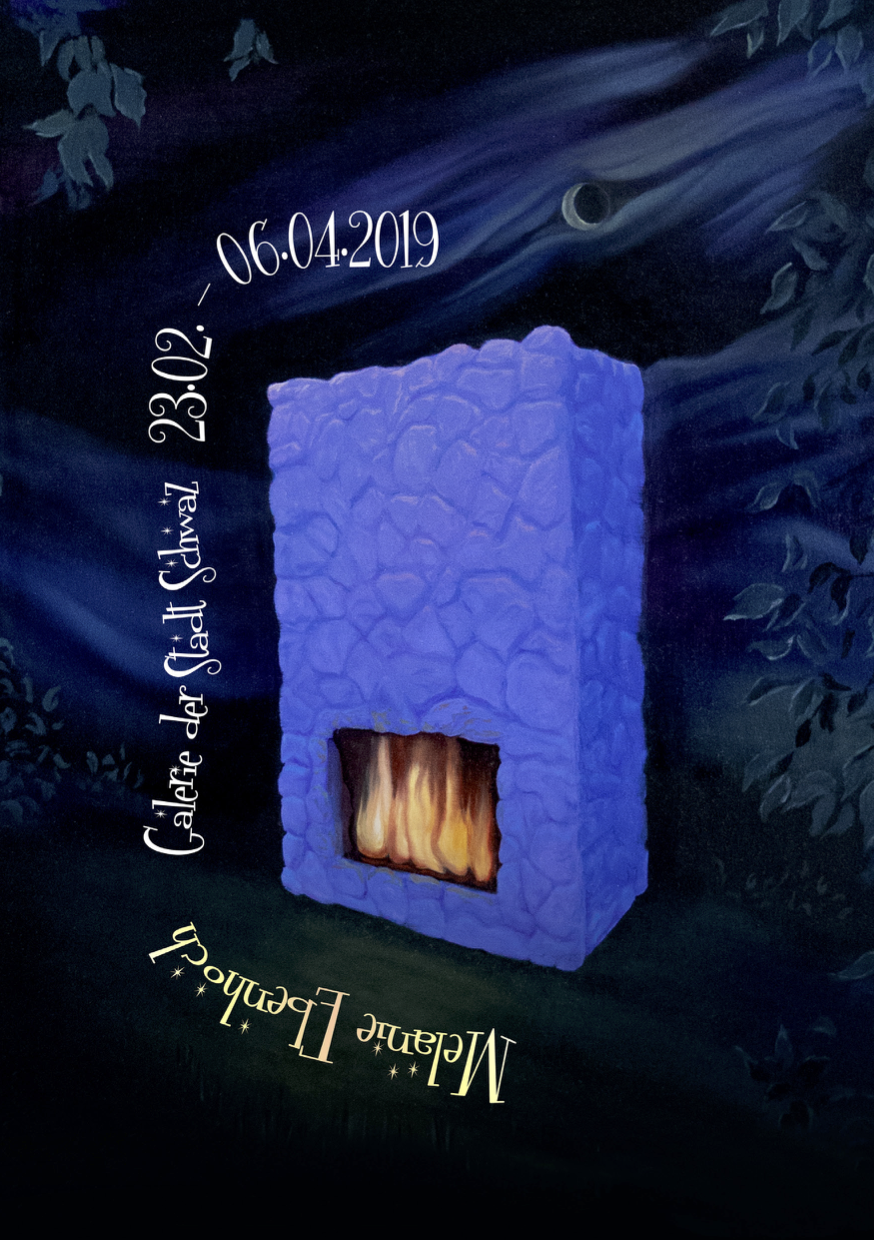 The combination of fireplace and picture is significant. Longings rising from the embers meet their pictorial counterparts above the mantelpiece - paintings, flat screen TVs, fleets of framed family portraits. But Melanie Ebenhoch displays her canvases not above, but inside the fireplace, right where the projections go up in smoke. She places painting at the interface of sculpture within a larger spatial context. Her paintings have a haptic surface that highlights the shift between illusionistic depth and the immediate physical presence of the work in the exhibition space. In Schwaz she shows several objects that are simultaneously painting substructures and frames: faux fireplaces inspired by Jayne Mansfield’s “Pink Palace” on Sunset Boulevard, Los Angeles, which is also depicted in one of the works. Another shows Rudolph Valentino’s house. Jayne Mansfield had her domicile designed as the ultimate kitsch temple which functioned as a backdrop for her self-productions. The icon took the image of femininity embodied by Marilyn Monroe a step further until the blonde sex goddess figure became almost a pastiche. Melanie Ebenhoch explores the image of women in film from the 1950s and 60s, an equally grandiose and tight corset of an image, the aftereffects of which are still present today. The fireplace sculptures’ faux rubble masonry is reminiscent of precursors of landscape and garden architecture, of ruins set up as a point de vue for rendering a landscape that in turn became the model for painting. They also call to mind theme parks or panoramas that dramatically intertwine surface and three-dimensionality. The associations resonating in Ebenhoch’s work originate where dreams and desires were generated in the past, and she examines these mechanisms in terms of their relevance today. Architecturally, chimneys are transitions between inner and outer. In the USA, the open fireplace in the home also symbolizes a connection to the original expanse of the American prairie, representing the dream of freedom and independence in its domesticated form. Unplastered brickwork often lends a rustic element to a modernist ambience, as is the case in many of Frank Lloyd Wright’s buildings. He also designed a house for Marylin Monroe, which was not realized during his lifetime but was later implemented on Maui as a golf club. Ebenhoch uses the lettering of this exclusive club for the entrance piece in Schwaz. She repeatedly shifts the frames of reference both in the works themselves and in the presentation, thereby generating new perspectives. Two pictures show a stylized young woman bending forward and peering through her legs at the viewer. The picture looks back. It disturbs the supposedly unobserved voyeuristic gaze. The conditions are flipped. In contrast to Gustave Courbet’s painting “The Origin of the World”, here the woman turns and “moons” the viewer with carnivalesque audacity. “Mooning” is the mockery of an opponent by exposing one’s backside. Although it has spread virally in recent years, the phenomenon is by no means new. Even the Goldenes Dachl (Golden Roof) in Innsbruck hosts a small figure baring his bottom towards the public. Perhaps even more irritating than the thwarting of the conventional gaze is the friendly moon-face’s apparent utter indifference to viewers, she seems far more interested in her own anatomy. The painting presents its affront tenderly with ostensible naivety in a kind of proscenium arch stage where the curtain is formed by the figure’s legs. In between, one sees romantic landscape motifs. Laughing, Melanie Ebenhoch plays a subversive game, a constant framing and re-framing, and thus makes a pointed suggestion of how the present day, which seems have lost all sense of proportion, can be questioned via the means of painting. Short Bio: Melanie Ebenhoch, born in 1985, lives in Vienna www.melanieebenhoch.com Selected solo exhibitions 2018 VIS, Hamburg; For Seasons, Zurich; Kevin Space, Vienna; 2016 Cornflakes, Hester Gallery, New York; 2014 You, you, you, Ellen de Bruijne Projects, Amsterdam; 2013 Melanie Ebenhoch, MAUVE, Vienna; I recently dreamed we shared the same thoughts, PA/////KT, Amsterdam Selected group exhibitions 2019 Comfortable hole bye, 4649, Tokyo; 2018 Body, L’Inconnue, Montreal; Wiener Raum, curated by Eva Maria Stadler and Lukas Kaufmann, Heiligenkreuzerhof, Vienna; 2016 Bar du Bois, Galerie der Stadt Schwaz; 2014 Me Me Me, Well Well Well, Vienna; 2012 The Research and Destroy Department of Black Mountain College, W139, Amsterdam