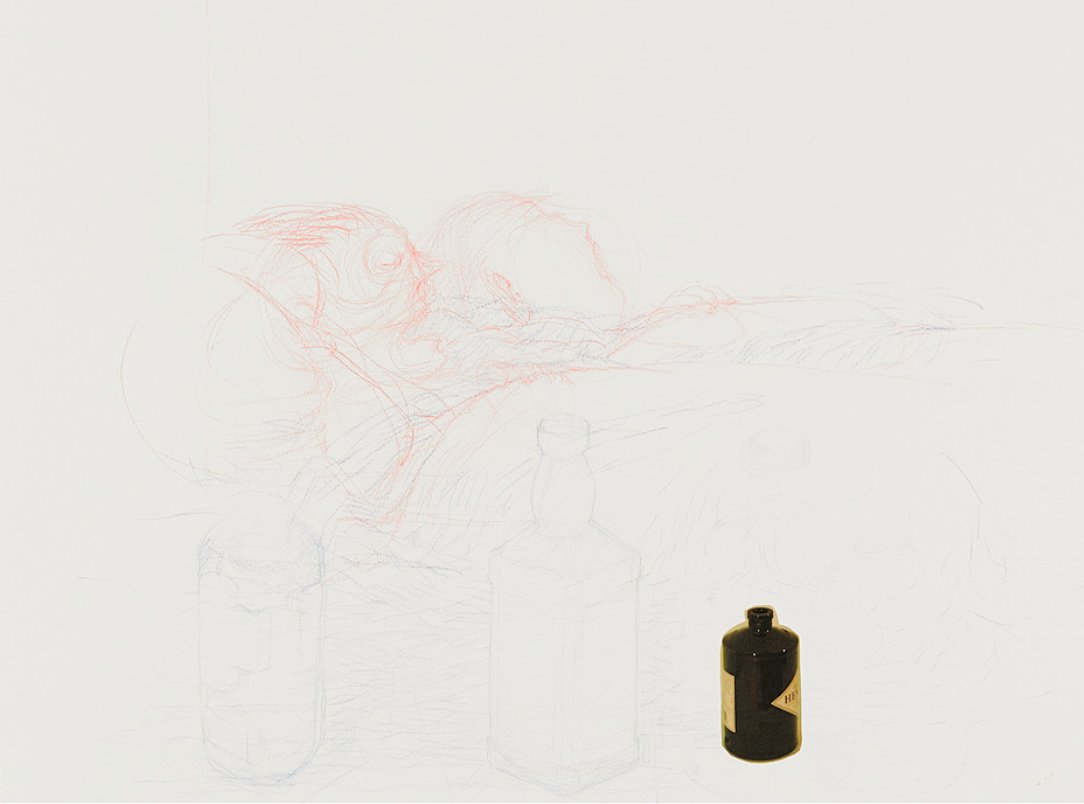 Painting tends to be understood as an individual physical expression that has little to do with the both fragile and violent notions of the body we find ourselves exposed to in its depictions and representations in the media. Showing works by Monika Baer and Jochen Klein in one exhibition is an attempt to see the body and painting together in a way which goes beyond subjective perception without denying the individual.
In his book La Peinture incarnée (1985), Georges Didi-Huberman distinguishes between pan and plan to describe the different semantic levels of surface. While plan signifies an area, a plain, that which is united and clear, pan is the word used to designate part of an area, a corner, or a fragment.
The exhibition “Pan and Plan” in the Galerie der Stadt Schwaz explores the relationship between area and part of an area, of pictorial entity and fragment in Monika Baer’s and Jochen Klein’s painting and is aimed at making painting productive as a strategy of looking and thinking critically.

Jochen Klein, who died an all-too-early death at the age of thirty in 1997, already investigated the connections between physical, sexual, social, cultural, media and political situations and circumstances during his time at the Academy of Fine Arts in Munich. In a study on the city’s English Garden made with his artist friend and colleague Thomas Eggerer he focused on the moral and aesthetic implications of the park’s history, confronting the historical conception of the English Garden with its appropriation by the student movement of the 1960s and the forms of physical culture resulting from it.
The cruising area toward the southern end of the park, an important meeting point for the gay scene, whose meaning as a level of use Klein and Eggerer reflected in a number of artistic interventions, plays an essential role in this context. In parallel to their conceptually conceived works, they painted. And they did so all the same. For painting was not a medium highly respected among young artists at that time. To Klein and Eggerer, it seemed important rather to take a stance against the painter princes’ and market strategists’ mighty gestures.
The park also came to play an important part in Jochen Klein’s pictures. The courtly grounds were turned into a public park for the people, a terrain representing the bourgeois order of eighteenth-century society. For Jochen Klein, the culturally differentiated language of forms characterizing such gardens and their completely aestheticized arrangement of grasses, flowers, groups of trees, bushes, and shrubs were the “stuff as dreams are made on.” He combined the desire for love and pleasure with the garden’s sumptuousness and wealth. He applied his paint lavishly and passionately to the canvas, while he showed restraint when rendering bodies as if they had to be protected, preserved from the all-too-visible. Klein’s understanding of painting evokes a variety of things ‒ from the first photographs of Pictorialism of the late nineteenth century blurring the contours of matter-of-fact indexical pictures in order to achieve painterly effects to the pop-cultural appropriations of the 1960s and 1970s when photographs taken with soft-focus lenses and cheap prints adorned writing paper and young people’s rooms. Jochen Klein’s works pay tribute to these pictures of longing which is why we can hardly bring ourselves to use the word kitsch, preferably applied to such a pictorial world, in this case. For the critical sensualism guiding his brush clearly springs from the wish to give room to the body. Jochen Klein deliberately changed his method of painting from naturalist subtlety to an expressive gestural approach which relied on the effects brought about by the materiality of paint.

Presenting Monika Baer’s work together with that of Jochen Klein emphasizes the self-reflective character of the latter’s painting with its shimmering landscapes and precarious bodies. Monika Baer literally brushes painting against its grain with its own means. Her kind of stroke, mode of applying color, naturalism, abstraction, and expression define a range of painting that asks to be decoded.
Spiders, breasts, walls/holes, vampires, streets, and money are the motifs Monika Baer deals with in her workgroups. By confronting an issue and pursuing it, the artist arrives at the next question through the production of a picture. That the motifs are seen as synonyms of painting seems to be crucial. In her breast paintings, curved forms jut out against a light blue background from a seam dividing the canvas into two parts. The seam stands for jeans, tight jeans, for the erotically charged symbol of porn and popular culture. Monika Baer stages the interaction between the sexes, merges sperm and milk, and thus stretches the traditional role attributions of man and woman to their limits. Rendering bodies or body parts, the artist does not adopt a recording attitude or employ an additive method, but strives to capture the bodies in the penetration of form and ground. Her wall pictures provide impulses for a reflection of what painting might achieve or what is expected from it. As in Balzac’s “The Unknown Masterpiece,” in which Poussin sees a “wall of painting” covering Frenhofer’s canvas, a surface holding the capacity for metamorphosis, Monika Baer knows how to interrelate the tactile tensions of the canvas with the viewer’s emotional potential.