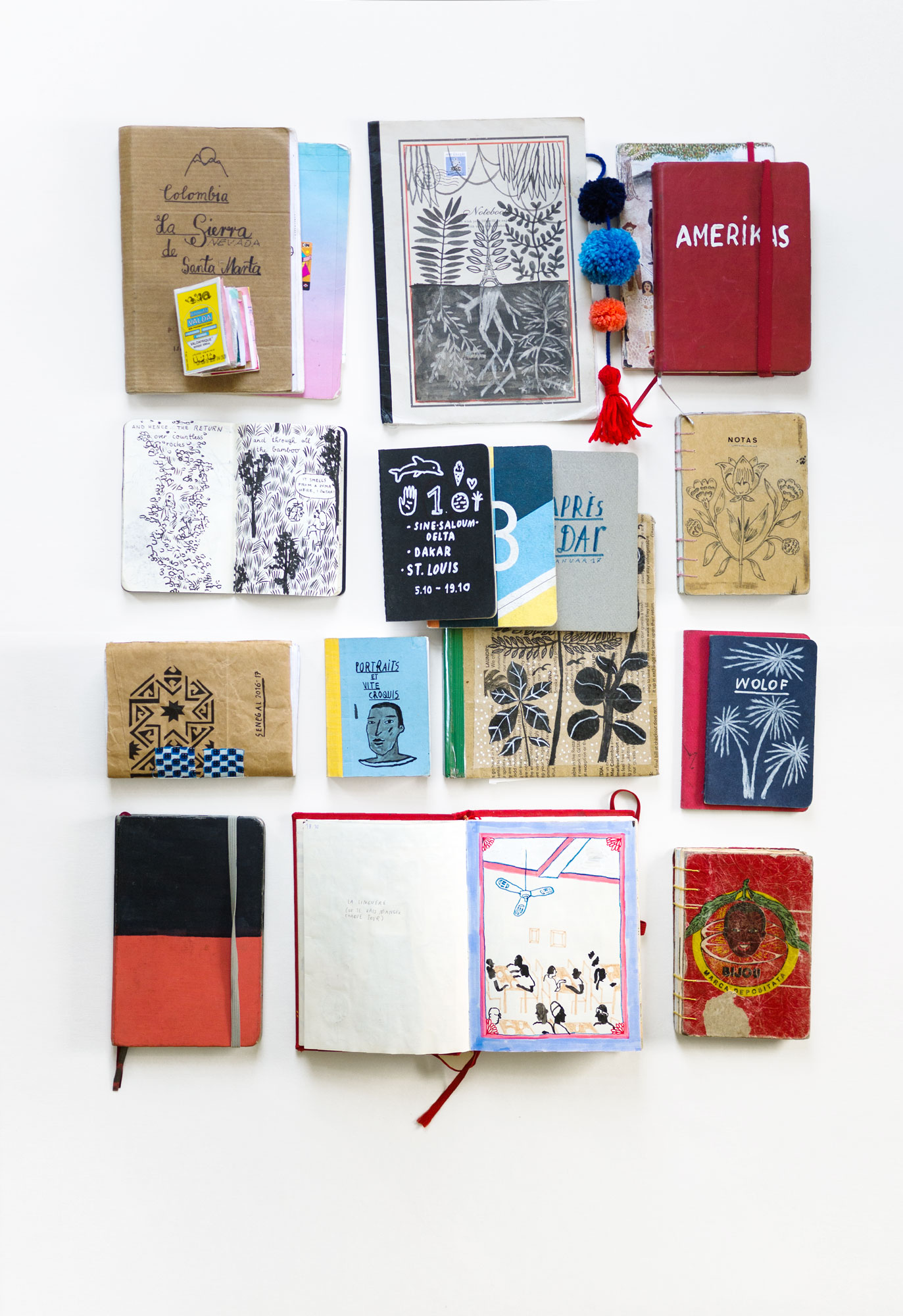 We collect souvenirs in order to forge a series of memories of different places in the world. We are tourists, visitors, workers, seekers and explorers. At some point our memories of these sites dwindle down to just this single memento. We strive to preserve these memories – they become a part of our identity and are often reflected in the objects we bring back from distant lands.

The exhibition Souvenirs by Patrick Bonato (born in Rum, Tyrol) and Isabel Peterhans (born in Baden near Zurich) presents a global journey in pictures. For their first joint exhibition in Galerie der Stadt Schwaz, the two artists present work originating from observations, encounters and experiences garnered on an extended journey in 2017. These include numerous sketchbooks, prints and drawings. Through sketching, preserving and collecting these experiences and then reworking them into new versions they have created an extensive body of work which offers us their personal view of history, culture and lifestyle in Senegal, Colombia and Mexico.

Patrick Bonato and Isabel Peterhans are both comic artists and illustrators. The idea for the project was based on actually living and working in these contexts over a longer period, not merely travelling through, in order to allow different approaches to emerge, identification with the place to occur, and perhaps even developing a sense of home. The artists produced drawings throughout the journey, mostly from life but also from memory. The resulting sketches formed an important basis for their later works.

In Senegal, Bonato designed his Toubab character, which translates to ‘white man’, for his comic of the same name. This Toubab stands in contrast to existing narratives of the white man in Africa as discoverer, conqueror or helper. Bonato portrays him conversely as a somewhat clumsy, lost figure in a strange and unfamiliar environment.

Equally important in Bonato’s work is the aspect of landscape. Sketching from life serves the purpose of amassing an extensive repertoire of scenic backdrops, which can be used in other works as required like pre-prepared set pieces. This view of landscape, and its implementation in the resulting comic as a kind of parergon, or accessory, shows the influence of the American comic artist Frank Santoro, with whom Bonato studied for a time in Pittsburgh, USA during the trip. This is particularly apparent in the Mexican picture book ‘La Vida en un Sorbo’, in which the scenic background is granted the elevated status of stage design. It becomes an actor in and of itself.

Peterhans’ exploration of the characteristics, stories and cultural histories of Saint Louis, a city on the northwestern coast of Senegal, culminates in an interactive work. She reworks impressions of everyday scenes and places them in front of real buildings around Saint Louis. She wanders through the city with the completed paintings and asks inhabitants to tell her stories about the respective places depicted in her drawings. The various stories comprise childhood memories, biographical accounts, mystical tales, or ghost stories. This interactive collaboration results in a multifaceted portrait of Saint Louis, giving us a complex picture of social and cultural life that reflects the different realities of the city.

In Colombia she investigates the cultural and ecological background of Sierra Nevada de Santa Marta. She designs a children’s colouring book for a school, integrating cultural and environmental influences to create a collection of site-specific colouring templates and representations of flora and fauna. The book was primarily intended for the children of internally displaced persons from throughout Colombia, and presents the correlations between natural, ecological and cultural-historical aspects from their environment in a child-friendly way.

Short bio:
Patrick Bonato, born in 1983 in Rum, Tyrol, studied graphic design at the University of Applied Arts Vienna and illustration at the Lucerne School of Art and Design. He works as a freelance illustrator, graphic artist and author of graphic novels in Innsbruck and elsewhere. In 2018 he received the Scenario Award at the Fumetto Comic Festival in Lucerne.
Isabel Peterhans, born in 1986 in Baden near Zurich, studied illustration at the University of Applied Sciences and Arts in Lucerne, as well as Arts and Design at the Bezalel Academy in Jerusalem. She has worked as a freelance illustrator and comic artist since 2012. Her graduation show Yallabyebye was awarded prizes by the Zeugindesign Foundation and the Wilhelm Wirz Foundation, Basel and was published in 2014 by Edition Moderne, Zurich and L' Agrume Edition, Paris. Since December 2017, she lives and works in Innsbruck.